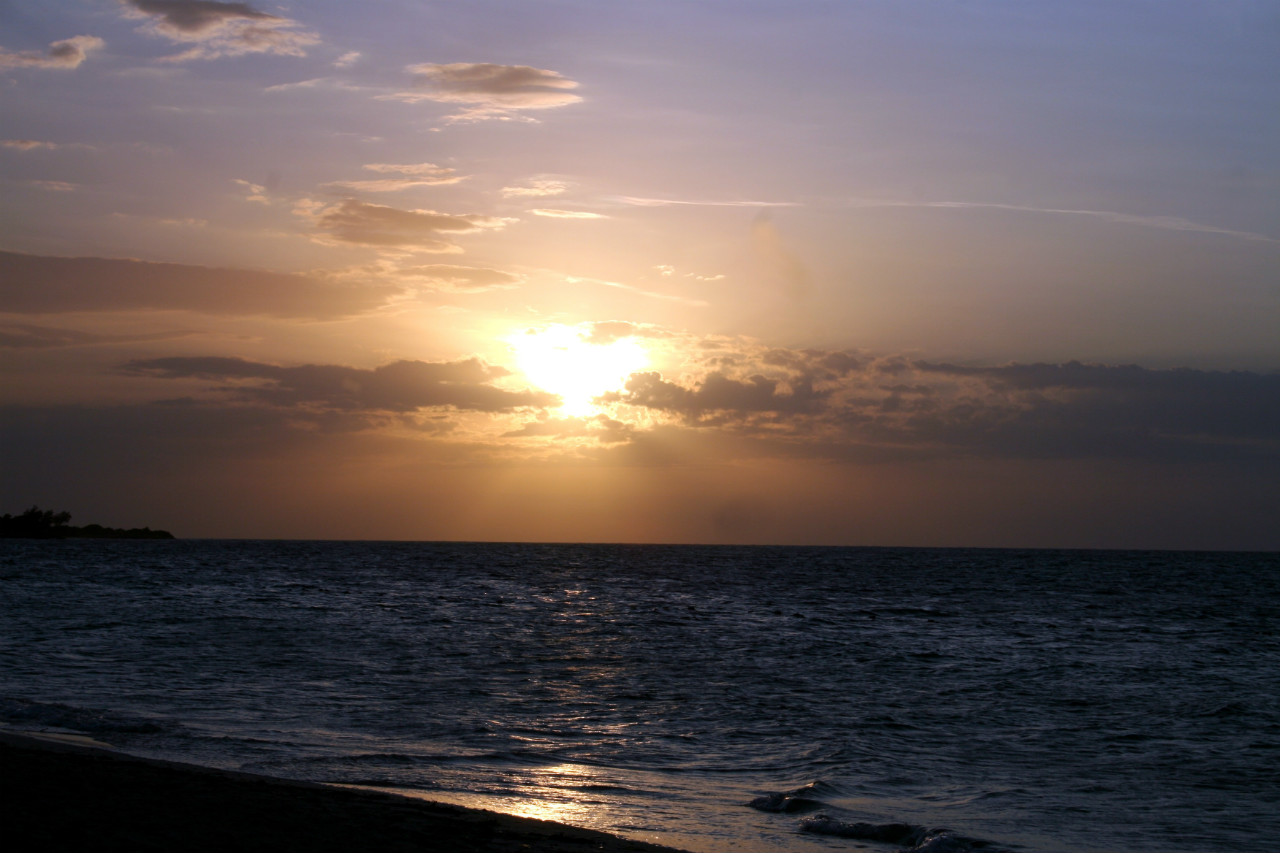 It was our last night of vacation in Jamaica. We wanted a picture of the sun setting over the water, so we lingered on the beach long after most of the tourists had called it a day. As we waited there, we noticed a lone security guard nearby. We knew nothing about this woman, but we felt prompted to strike up a conversation with her. Almost immediately, we learned that we had something in common with her: Jesus. Our conversation quickly moved to spiritual matters. She talked about some of the challenges she had faced in a community where being a Christian put her in the minority. She shared about how she was ridiculed and mistreated for her faith by her co-workers and about how she had witnessed the attacks of the spiritual enemy on her children through sudden illnesses. I remember her chilling words, “If the devil cannot get to you, he will try to get to you through your children.” Her authenticity and enthusiasm made it a memorable conversation.

We stayed through sunset and took our photos, being sure to include our new friend in them. Before parting ways, we asked her if we could pray together. She was eager to lead us in prayer. She and our whole family clasped hands and united our hearts as we stood in a circle on the beach. She prayed so sincerely that we could feel the presence of the Lord encompassing us. Her words were thoughtful, intentional, and powerful. She used a phrase I have never heard anyone use in a prayer before that night: “We fear you God.” She said it several times. It struck my heart that I had never said this to the Lord. I’ve said all kinds of other words to Him: love, praise, worship, adore, exalt, magnify. But not “fear.”

It occurred to me that most of us don’t really fear God at all. If we did, I think we would behave differently. This is the God who made the world and everything in it. This is the God who saw the wickedness of man and flooded the world, destroying everything and everyone that was not on the ark. This is the God who called a people to be His own and delivered them from captivity by sending plagues on their captors. This is the God who parted the Red Sea and the Jordan River so His people could cross over on dry land. This is the God who took on flesh and dwelt among us. He healed every kind of disease and raised the dead to life. He died for our sins and promised us eternal life if we will put our faith in Him. He is an awesome God, an awe-inspiring God. He deserves to be feared.

What does it mean to fear the Lord? Are we to be frightened? Afraid? Terrified? Well, if we don’t have a personal relationship with Him, I think we should be terrified of Him – we will face His judgment, wrath, and condemnation one day. But for those who are in Christ, there is no condemnation (Romans 8:1). Jesus has already taken God’s wrath on our behalf.

So, if we are in Christ, should we fear God? Psalm 34:9 says this, “O, fear the Lord, you His saints.” Saints are believers. So, yes, we should fear Him. As believers, are we to be afraid of Him like those who will receive His judgment and wrath? No! We are to honor Him, revere Him, be in awe of Him.

Psalm 34 provides some instructions about how to fear the Lord: “Come, O children, listen to me; I will teach you the fear of the LORD…. Keep your tongue from evil and your lips from speaking deceit. Turn away from evil and do good; seek peace and pursue it” (Psalm 34:11, 13-14). Our words and deeds should honor the Lord. We should be peacemakers who chase after peace, not just passively “keeping the peace.” These actions demonstrate a proper fear or reverence of God.

Is there any benefit to obeying this command to fear Him? Yes! Psalm 34:9 continues with this encouraging promise: “…for those who fear Him lack nothing!” Reading through the Proverbs, we find these truths as well – the fear of the Lord is the beginning of knowledge (Proverbs 1:7) and wisdom (Proverbs 9:10). “The fear of the Lord leads to life, and whoever has it rests satisfied; he will not be visited by harm” (Proverbs 19:23).

Everyone should fear God. Sinners should be fearful of Him as their eternal Judge. Believers should be reverent and live in awe of Him, honoring Him with everything we say and do. But how can we do this in this fallen world, where evil is rampant and it is so hard to do and say the right things? This is the best part! God promised to put the “fear of God” in His people! He promised to initiate a covenant, a solemn and binding agreement, with those who would put their faith in Jesus. He said, “I will make with them an everlasting covenant, that I will not turn away from doing good to them. And I will put the fear of Me in their hearts, that they may not turn from Me” (Jeremiah 32:40).

Under this covenant, God promises not to turn from doing good to us! He promises to put the fear of God in our hearts so that we will not turn from Him! Thus, He enables us to follow His ways: to keep our tongues from evil, to do good, and to pursue peace. He enables us to fear Him, to respect Him, and to live in awe of Him.

What about you? Do you fear God? Is it because He is your Judge instead of your Savior? You can change that fear right now from “fright” to “awe.” Put your faith in Jesus. As our Savior, He puts the appropriate “fear of God” in us. We come to love and admire His impeccable character and eternal attributes. We learn to acknowledge His awe-inspiring ways. We can agree with my Jamaican friend in our prayers and confess to Him with sincere hearts: “We fear you God!”