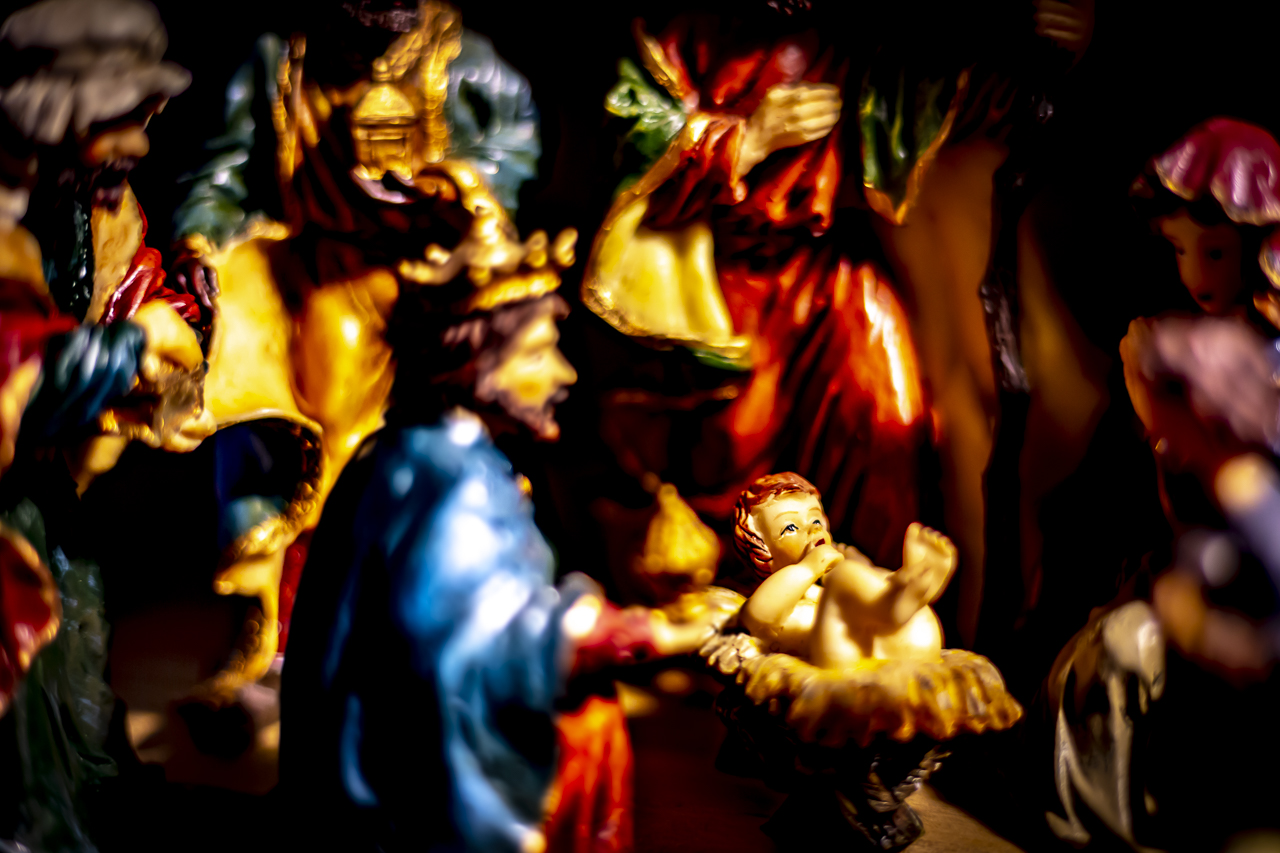 At this time of year, nearly everywhere we go we see signs of Christmas. We like to drive through our community, turn on some Christmas music, and enjoy the decorations that adorn the yards and houses. Twinkling lights of various colors hang on bushes and trees and outline the houses. There are evergreen wreaths embellished with red and gold ribbons, candles glowing in the windows, and Christmas trees overflowing with gifts of all sizes and shapes.  Yards are filled with large plastic or inflatable characters, from Santa and snowmen to the Nativity with Baby Jesus at the center – the baby who was also known as the King of the Jews.

According to Matthew 2, wise men from the east followed a star to Jerusalem in search of this King. They went to the reigning king, Herod, and asked, “Where is He who has been born King of the Jews? For we saw His star when it rose and have come to worship Him” (Matthew 2:2). These wise men knew that this King was different from every other king – He deserved worship because He was God in the flesh, and they brought extravagants gifts to honor Him. His name was Jesus.

When Jesus was a grown man, the message He brought to the world had been introduced by John the Baptist before Him: “Repent for the kingdom of Heaven is at hand.” Many of His parables and lessons were about this kingdom, and about the King (about Himself). In Matthew 25:31-46, He explained that everyone from all the nations will come before Him on His glorious throne, and they will be divided as a shepherd separates the sheep from the goats. The “sheep” are the righteous people who will enter into His kingdom, and the “goats” are the unrighteous who will be sent away from His presence.

To illustrate the difference between the sheep and the goats, He points to their works. The way they have treated other people indicates the true condition of their hearts. It is only by faith that we are saved, not by works (see Ephesians 2:8-9), but our works reveal our faith (see James 2:17-18).

So, how were the works of the sheep different from the goats’? Matthew 25:35-36 says, “For I was hungry and you gave me food, I was thirsty and you gave me drink, I was a stranger and you welcomed me, I was naked and you clothed me, I was sick and you visited me, I was in prison and you came to me.” Having never seen the King while doing their good deeds, they asked when they had done such a thing for Him. And the King’s answer was: “Truly, I say to you, as you did it to one of the least of these my brothers, you did it to me” (Matthew 25:40).

This passage struck a nerve in me. You see, we live in a relatively affluent area, and my family is blessed to have a steady income, a home, food, clothes, etc. Compared to the rest of the world, we are wealthy, even though we are pretty average in our area. We don’t really have that many beggars on the streets around us – almost none in my little suburb, but there are a few in the bigger city nearby. Through His Word, the Lord has changed my heart about helping the ones on my path.

In the past, whenever I would drive by people standing on the corner holding a sign asking for help, I would generally ignore them. Then my own children taught me a lesson: if they are on my path, then God put them there. God is giving me an opportunity to pray for them and perhaps give something to them – even just a bottle of water. So, I started trying to give something, a few dollars, a bottle of water…anything. But I wanted God to get some recognition and I wanted the recipients to know that God was watching how they used the money. Ok, so my heart wasn’t quite right yet. One of my kids even accused me of being aggressive as I yelled out the window to the one receiving the money – “this is given in the name of Jesus!” Ouch. I was being aggressive. There was still room for improvement.

I found some little ten-cent Bible verse cards that I had left over from a Bible study, and decided that instead of speaking a word, I would just hand them the Bible verse with the money or gift. I tried it. When I drove away, I looked back in my rearview mirror and saw the man reading the card! How exciting! The Bible says that His Word never returns void, but accomplishes what He sends it out to do (see Isaiah 55:11). I was now praying, in accordance with His Word, that He would do just that.

My heart was changing. But the real change happened when I was reading Matthew 25, and I came to the part where the King said, “Truly, I say to you, as you did it to one of the least of these my brothers, you did it to me.” Could it be that these vulnerable people standing on our streets were among “the least of these,” and if I gave to them, I was giving to my King? Wow! Now, instead of dreading those corners and avoiding eye contact with them, I was looking forward to the opportunity to give something to my King through them! As I approach those intersections, I get my gift ready. There have been times when I have gotten there only to find an empty corner. And instead of feeling relieved that I don’t have to give, I have felt disappointed that I didn’t get to give. Jesus said, “It is more blessed to give than to receive” (Acts 20:35), and I was beginning to understand this.

I am not perfect, and I don’t always do the right thing, but when I have been obedient to Him in giving to others, He has blessed me with incredible joy and peace, and these life lessons: He has taught me to give as though I am giving directly to Him, He has shown me the importance of doing it in love and with joy, and He has inspired me to pair each gift with an everlasting Word (Bible verse) instead of my own words. He is showing me that He is able to make the gift abound to them, and that I will receive my own personal blessing from Him when I do it with the right attitude. Truly, “it is more blessed to give than to receive.”

My prayer is that like the wise men who gave extravagant gifts to Jesus, this Christmas we will all give joyfully and generously to those in need. King Jesus came from Heaven, took on flesh, was born as a baby in a manger, lived a sinless life, was rejected by His own, was crucified and died to pay the penalty for our sins, rose on the third day to demonstrate that God’s wrath was satisfied by His death, and ascended to Heaven, sending us the Holy Spirit to indwell us and live with us for the rest of our lives…if we will submit our will to Him, confess our need of Him, and follow Him, living according to His Word.

Yes, Jesus is King. He deserves our worship and everything we have to offer Him. Jesus is Savior. He deserves our submission. Jesus is the Light of the world, and He wants to shine through us. This world is dark, but we have the True Light. May it shine this Christmas season and throughout the year as we give generously and joyfully to those in need and by doing so, we will be giving to the King!