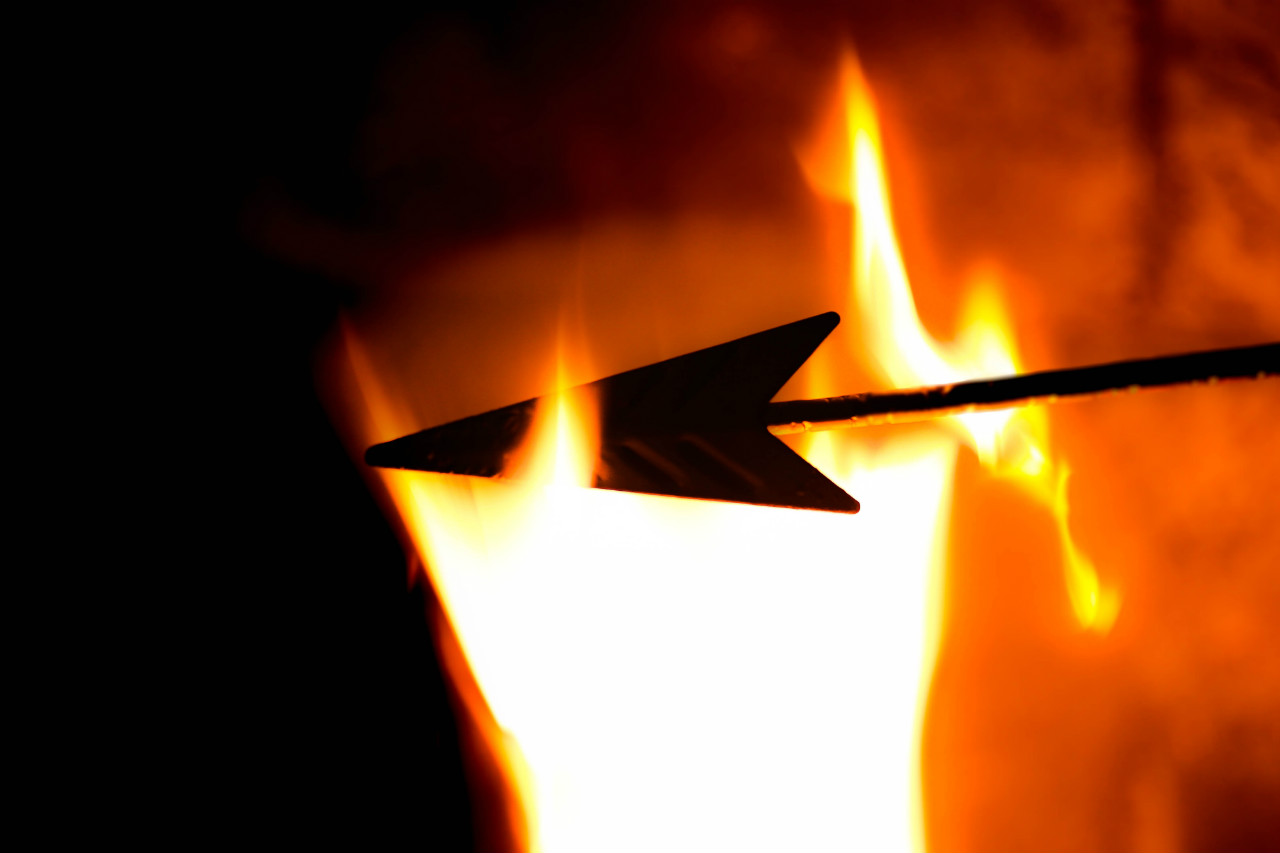 Have you ever struggled to keep worrisome thoughts from penetrating and monopolizing your mind? This is a battle I lost for years. But no more! Now I know how to fight and win this battle, even though I don’t do it exactly right every time.

If we are followers of Jesus, true Believers, then we will have spiritual opposition (Eph. 6:12). But God has given us everything we need to withstand our enemy.  He gives us strength (Eph. 6:10) and spiritual armor (Eph. 6:11-20). When we put our trust in His strength and put on the whole armor of God, we are able to stand against the schemes of the devil (Eph. 6:11). There are several pieces of armor – the belt of truth, the breastplate of righteousness, shoes of readiness from the gospel of peace, and the Sword of the Spirit, but I want to focus on the shield of faith. According to Eph. 6:16, we are able to extinguish all the flaming darts of the evil one with the shield of faith.

What are “flaming darts of the evil one?”

Flaming darts, or arrows, were used in battles to set things on fire. In our spiritual lives, flaming darts are temptations to go our own way, to disobey God. They may seem to come out of the blue at us, like an arrow launched from an unseen location. They have the potential to pierce and to burn. In my battle with worry, worrisome thoughts come at me like flaming darts, threatening to set me on fire – not the kind of fire that is warm and cozy, but the wildfire variety that is destructive and devastating. When I give in to these thoughts, my whole being can be negatively impacted. Looking back over the years, there were times when worry took me over – I could not focus my mind on my tasks, so things were not getting done (and other people would be impacted by that!). I made myself physically sick with worry – I couldn’t sleep and started having issues with my stomach. It finally worsened to the point that I had to see a doctor and have tests, and I ended up on medication for a while.

When I bottomed out, I had a choice to make: Am I going to continue to let these worrisome thoughts overwhelm me or am I going to fight them off? It was time to fight. I looked back at what God’s Word tells me: He gives me strength and armor for the battle. The question was not whether God was faithful, but was I? My attention was drawn to the shield of faith. It was supposed to extinguish every flaming dart of the evil one. How were these darts (worrisome thoughts) getting to me? I wasn’t holding up the shield of faith.

What is this shield? Or I should ask “Who is this Shield?”

There are a number of scriptures* that support this statement, but my favorite is Gen. 15:1. God is talking to Abram (later known as Abraham) about the promises He has made to him. At this point, He has called Abram to leave home and go to the land God will show him. Abram has obeyed, taking his family with him. God had also promised to make him into a nation, but at this point Abram has no children. The years are passing by as he and his beautiful wife, Sarai, reach ages well beyond the child-bearing stage of life. In Gen. 15:1, God tells Abram in a vision: “Fear not, Abram, I am your shield; your reward shall be very great.” Did you see that? God is his Shield!

If God is my Shield, what is my part?

My part is to put my faith in God, to believe what His Word says. It takes faith to believe His Word when you’re battling the flaming darts of worry. By choosing to believe Him and His Word instead of believing the worrisome thoughts, we are able to withstand the temptation to worry. Let me return to my own story. I was reading through an old journal and found this entry about a struggle with worrisome thoughts:

Two days ago, I was in a battle of the mind – I refused to worry, but felt an overwhelming temptation to do it. The flaming darts came at me in the form of a list of reasons why I should worry. I prayed, stating over and over again my intention not to worry. And then I opened my Bible and studied my Sunday School lesson. I kept studying, focusing on the Lord, on His message for this week, and praying for insights about the lesson. The darts stopped hitting me.

Later, as I looked back on that situation, I realized the posture I had taken – I had my head bowed over God’s Word, in a posture of submission to Him. I focused my thoughts on Him and the Word I was reading. He caused the enemy to flee and take his flaming darts with him. I couldn’t help but remember James 4:7! It says, “Submit to God, resist the enemy and he will flee!” That day, the Lord brought me to a place of submission and made it possible for me to resist the enemy by focusing my thoughts on the Bible…and the enemy left. Quietly, without my even noticing at first! He fled! The darts stopped. The worrisome thoughts evaporated.

As long as we are on this planet, we will face opposition from the enemy. But we can rejoice, even in this, because the One who is in us (as Believers) is greater than the one who is in the world (1 John 4:4), and there is nothing he can do to us without God’s permission. If God allows it, then He will use it for good (Romans 8:28). We can know these facts! His Word says so! His goal is to conform us to the likeness of Christ (Romans 8:29), and He will even use our struggles to teach us and change us to be more like Him.

What flaming darts are piercing your soul and your thoughts? If you don’t struggle with worrisome thoughts, perhaps you are tempted by doubts, insecurities, fears, anger, bitterness, sarcasm, gossip. No matter which darts are being launched by the enemy in your direction, God’s Word says that ALL of them can be extinguished by the shield of faith (Eph. 6:16). The One who calls us is faithful, and He is our Shield. Put your faith in Him today, hold that Shield up high as you believe what He says in His Word, and He will extinguish every flaming dart that is launched at you. We can live in victory over worry and every other temptation. His Word says so. I choose to believe Him!